Pacific Hoseflex expansion joints are made of contour moulded PTFE (white or black), providing exceptional corrosion resistance and flex-life. The flexible liner is moulded over the metallic sealing face which eliminates troublesome separate gaskets and reduces the chances of bacteria build up. Different numbers of convolutions accommodate varying degrees of misalignment, axial travel and angular deflection between components.

These expansion joints have found widespread acceptance in the chemical processing industry and commercial heating and air-conditioning systems as pump connectors and at strategic points throughout systems. Because of their established record of long service life, they are the most economical vibration and sound absorbers available.

They are manufactured with integral steel limit bolts and reinforcing rings enabling the bellows to absorb vibration and allow for thermal movement and misalignment in piping. They also provide resistance to rotational forces which can lead to joint failure, offering long life in coastal, marine, and chlorine rich environments.

They are available in 2, 3 and 5 Convolution models, with varying amounts of allowed movement.

PTFE expansion joints are capable of handling all of the following movements:

•     Angular misalignment – called angular deflection and angular rotation, is the displacement of one flange in relation to the other causing them to lie in non-parallel planes.

•     Vibration – Absorbing movement caused by generators or pumps that may result in pipe work cracking.

•     Parallel misalignment – called offset or lateral deflection, is the displacement of one flange in relation to the other while they lie in parallel planes.

•     Maximum travel is based on installation with no misalignment or angular deflection.

•     Maximum Misalignment is based on installation with no Travel or Angular Deflection.

•     Combined travel and misalignment are proportionately lower for each type of deflection according to the percentage of the “maximum” that is required for the other. 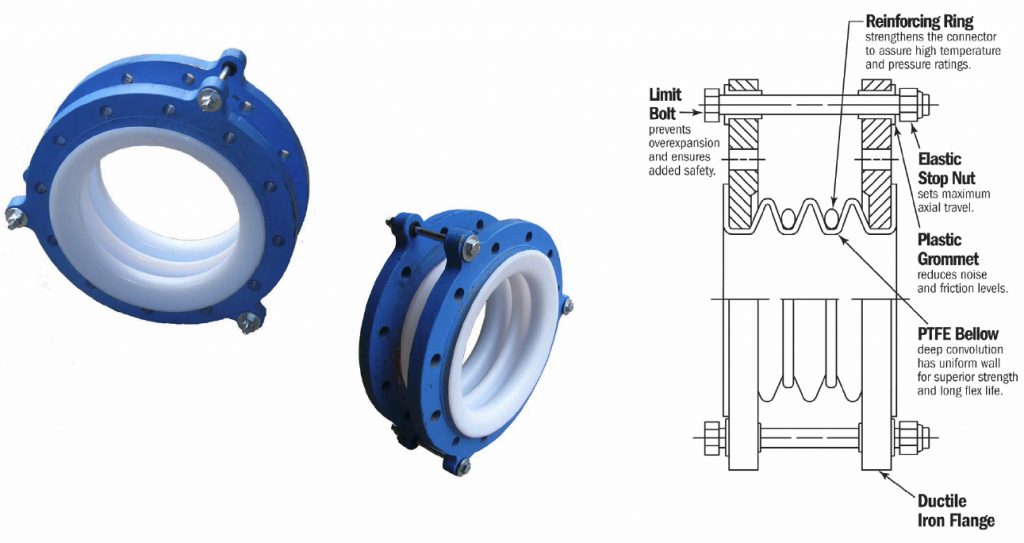